Emma Fick was born in Covington, Louisiana in 1991. After completing her degree in English Literature and Art History in 2013, she taught English in Serbia and began to chronicle its culture in a series of watercolor illustrations called “Snippets.” The illustrations caught on, and thanks to a grant from the U.S. Embassy, Emma returned to Serbia the next year to pursue painting full-time. After publishing her first book of illustrations, Snippets of Serbia, in 2015, she returned to New Orleans and began working on Snippets of New Orleans, which was published in 2017. In New Orleans, she shifted to fine art, with a conceptual focus on hybrids: merging Louisiana-specific symbols and ancient Byzantine frescoes; creating half-human half-bird mythological creatures; combining plant species in ways not found in nature. Her current work, all watercolor and ink on paper, explores cultural, biological, and floral hybrids and the endless permutations they allow.

My work is situated at the boundary between word and image: paintings evoke stories, symbols can be interpreted like texts. My sketchbooks are filled with words – a single word that strikes me, a short phrase that ricochets back and forth in my mind like a mantra—and images often grow from those. Vessel; oviform; alkonost; mandorla : sometimes naming something gives it shape.

No doubt this symbiosis between word and image is a result of an academic background in literature. When I began painting, I retained a literary way of looking at the world: reading, connecting, synthesizing, finding connections, parsing out meaning, identifying patterns, refining theses. Images –not words–are now my primary tools of expression, but when I paint I begin, as I do in literature, with primary sources. I research Byzantine iconography; ancient Egyptian hieroglyphs; old Russian folklore illustrations; amulet chests in Thailand; stone reliefs telling an epic tale around the Angkor Wat palace in Cambodia. I identify patterns—birds, eggs, almond-shapes—and slowly pull bits and pieces from art history, across geographies and eras, and endeavor to create my own visual language, a composite of so many different cultural vocabularies. I layer fragments of art history, plucked from their domain—the Egyptian Cartouche, the elongated Byzantine face, the round niches for amulets from Thailand—and combine them with personal stories, explorations of my identity as a woman and the elements of the Louisiana landscape where I grew up. The result is the creation of a personal visual language, fragments of self embedded in the intertwined narratives of art history. 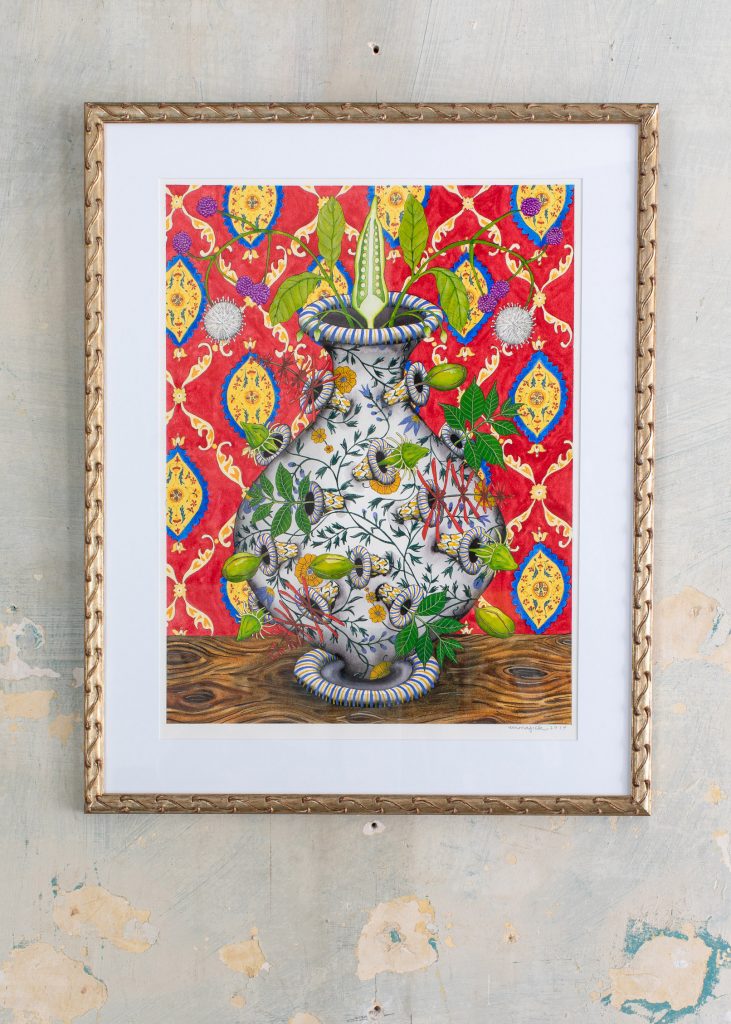